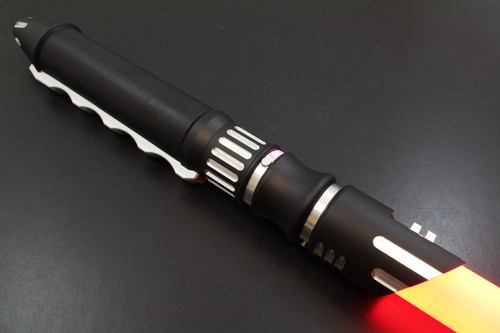 Powerful and intense. Two words that can barely contain the level of awesome this saber exudes. Every inch of it detailed and balanced, from the forked emitter that is slightly over bored at the end to allow the glow from the blade escape better. To the two coin edged, bridge pieces connecting the forks, the asymmetrical concave choke, the milled details around the lower emitter area, the super comfortable grip bar that spans over a luxurious piece of glove quality lambskin leather, all the way down to the tapered pommel with spiral cut sound vents resulting in one of our loudest Combat Class sabers. This new Version 2 design sees the removal of the AV switch seen in the last version of the past several years, and in its place, 2 low profile tactile switches that can now be configured independently with either aluminum, brass, copper, or RGB backlit clear acrylic plungers. The optional accent LEDs have been changed to a new 8 segment SMD bargraph that mounts between the switches for a more verbose external lighting feature. The Maelstrom Blackout includes a cloak of flat black powdercoating on the main surface area, leaving the details to shine through in bare aluminum for stunning contrast. The Maelstrom Blackout can be all things to all wielders and is nearly unmatched in balance and comfort.

We do not offer returns on our products as they are handcrafted to order and made specifically for each customer. Should there be an issue with the products function and it is covered under our warranty , we will be glad to service or replace the product at our discretion. In the event that we accidentally ship you the wrong item, of course we will take care of getting you the item you ordered and take care of all shipping charges incurred in making it right.

We can ship to virtually any address in the world. Note that there are restrictions on some products, and some products cannot be shipped to international destinations.

Please also note that the shipping rates for many items we sell are weight-based. The weight of any such item can be found on its detail page. To reflect the policies of the shipping companies we use, all weights will be rounded up to the next full pound.

All Vader's Vault products valued at $100 or greater will be automatically insured. This means that all 'Sabers' sold here will be insured automatically. Trust us, if you ever need it, you'll be glad you had it, and so will we. The last thing we want to do is eat something because the shipping carrier lost or damaged it, and we're pretty sure you, as the customer, don't want to be out any money. 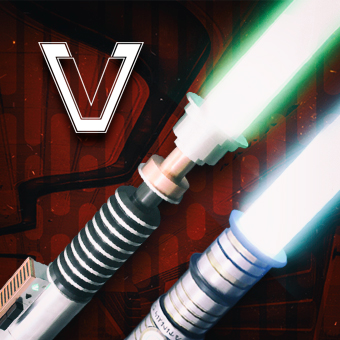 Our newsletter subscribers are the first to know when new products drop. Join us now!